Wednesday, July 7, 2016 – After Greg completed his long awaited interview for Global Entry Pass, we started our great westward adventure.  We left Nashville around 1:30 p.m. in drizzling rain.  For the first time ever, we tried listening to a book on tape, a Peter Robinson mystery, and the miles flew by.  We made it to outskirts of Kansas City and checked into Hampton Inn Blue Springs, KS.

Thursday, July 8, 2016 – We finished book one and then started with Chris Bojalian’s thriller, The Guest Room.  It wasn’t great literature, but it helped us to get through the monotony of Kansas and we ended up in Denver much earlier than we had anticipated.  Changing to Mountain Time also helped as we gained an hour.  We went straight to Lucy’s house, relaxed on the front porch for a while and then tried a new place in Highlands Village known for Detroit style pizza, Blue Pan.  In spite of the fact that it was started by a Michigan alum, the rectangular deep dish pizza was really good.

Denver was experiencing unusually hot temperatures so we headed over to Sweet Cow for dessert.  As we were crossing the street, Lucy spotted Lauren and Wes Holstrom, our friends from our trip to Peru in September, 2015.  We had actually texted them earlier about getting together while we were in town and couldn’t believe that we ran into them by chance.  We visited with them while enjoying ice cream.  Unfortunately, we discovered that Wes holds some very strong political views and has no tolerance for anyone who doesn’t share them.  We dropped Lucy off, left some of our excess luggage and gear in her garage so that there would be room for her in the car during the weekend, and headed to Hampton Inn in Lakewood.

Friday, July 9, 2016 – Lucy met us at the hotel about 10:00 and we headed to Vail for the week-end.  After a quick stop at the Columbia outlet in Silverthorne where Greg found a cap and Lucy found Sorel snow boots marked down to half price, we went to Lucy’s favorite, The Blue Moon Bakery, for sandwiches to take to our condo in Vail.  We also picked up baked goods for breakfast on Saturday.   I had booked condo through HomeAway and after some issues based on change of my e-mail address, our reservation was confirmed.  We were at Ptarmigan Condominiums in West Vail, a two bedroom townhouse with patio overlooking Gore Creek.  It was roomy and well-appointed.  We loved sitting on patio listening to creek.  After lunch, we headed to Vail Village via the bus to explore.  Lucy called her friend Christy who was there for a wedding week-end and she walked around with us for a while.  We went back to condo to relax before dinner. 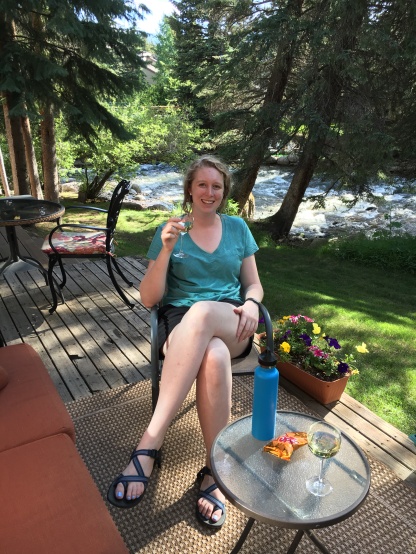 Based on recommendation from our condo host, we went to Mountain Standard for dinner. Although we didn’t have recommendations, we were seated in about 20 minutes and enjoyed one of the best meals ever.  Lucy and Greg both had the pork shank and it was unbelievably good.

Saturday, July 9, 2016 – We went to Minturn Farmer’s Market in the morning, about 5 miles from Vail.  It was great.  I bought Fresh Tastes cookbook from CO author, Lucy found an insulated wine flask that she is going to give as a wedding gift, and Greg got some soap on a rope that is supposed to repel bugs!  We also bought some smoked trout and salmon to enjoy for dinner and lunch. We made a quick stop at King Soupers to pick up lunch & dinner items and then headed to Piney Lake.  Greg had seen sign and remembered it from years ago.  Lucy had heard of it so we headed off on dirt road.  As Greg said, it was seven miles of bad road and then it got worse!  It took us well over an hour of bumping along before finally reaching the lake, but it was beautiful.  After tailgating in the parking lot (due to signs indicating no outside food or drink), we walked down to the lake.  Lucy and I decided to try stand up paddleboarding, a first time experience for me.

(insert pictures of paddleboarding and the three of us)

Although it didn’t take as long to get down, it was still a dusty, bumpy ride.   We headed over to the pool to relax when we returned.  Dinner was pork leftovers, smoked salmon, stuffed potatoes, salad, and wine.  After dinner we all watched an old Rita Hayworth movie, Gilda.   Unfortunately, none of us slept too well because of hot weather and fact that Greg was suffering from altitude sickness.

Sunday, July 10, 2016 – We went to Vail Farmer’s Market this morning and were overwhelmed with the size and the crowds.  It made me realize how lucky we had been to see the market at Minturn the day before.  We didn’t buy anything except lunch and then decided to head back to Denver.  I had no idea that the traffic into Denver would be as bad as it was, but apparently, this is what happens on the weekends.  Larry joined us for dinner at Meade Street Station.  We saw Katy and Coty when we dropped Lucy at her house.  Good news is that Katy had figured out how to get swamp cooler working so that house had cooled down considerably.  Denver had record high temperature of 101 over the weekend.

Monday, July 11, 2016 – Greg and I spent the night with Larry.  We went to Costco to buy wine to take to WA and to look for a fan for Lucy’s room.   Our tire pressure sensor light came on so we decided to run by the local Subaru dealer to have it checked.  They assured us that tire pressure was fine and it was probably just an altitude issue.  Larry declined our invitation to visit Galvanize and go to dinner so Greg and I headed to Platte Street to meet Lucy.  We were both so impressed with the facility and everyone we met. Lucy seems to be in a good place now!  We can’t wait to see where this six month effort takes her.  Dinner at Linger, five shared tapas plates, was great. 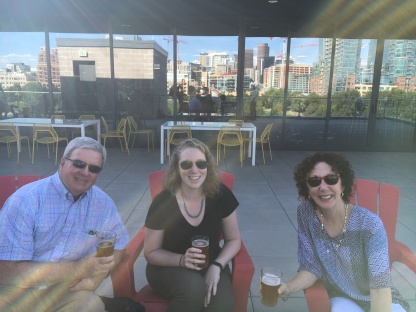 Tuesday, July 12 2016 – We left Denver and continued west.  Most of the time we were driving through western CO and Utah, I felt like we were on a different planet.  We stopped in Glenwood Springs, a quaint little town in western CO, walked around and then had really tasty lunch on the rooftop at Juicy Lucy’s. 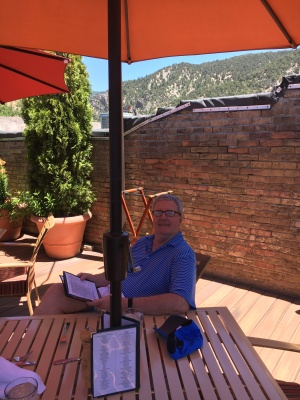 After lunch, we pushed on, with Greg doing most of the driving, and got to outskirts of Provo before stopping for the evening.  We stayed at a very nice Holiday Inn & Suites where they directed us into Springville for dinner at Magleby’s.  It wouldn’t be until the next day that we discovered Greg had left his credit card at the restaurant!

Wednesday, July 13, 2016 – Lots more driving today, through Utah, Idaho, and Oregon.  The geographic features of this part of the country are so stark.  It is hard for me to imagine living in areas this remote where there is so much land but so few people.  Most of the exits we passed had NO SERVICES signs so we had to be sure we bought gas and used restrooms when available.  We pushed on to Pendleton, OR, for the night.   We had a good dinner at local brewery, The Prodigal’s Son.  I had an onion tart which was one of the most interesting tarts I had ever eaten.

Thursday, July 14, 2016 – Before leaving Pendleton, we pulled into local Sinclair station to fill up and get bugs off the windshield.  Interesting fact, there are no self service gas stations in OR, so an attendant filled us up.  Topography changed dramatically as we drove through Oregon.  There were so many vineyards and wineries.  We stopped at one, Terra Blanca, and it was as nice as any of the wineries that I remember from Napa.  Greg tasted a couple of wines and bought a bottle of Cabernet Sauvignon ($25).

We arrived in Seattle just in time to make the 3:00 ferry to Bainbridge Island.  I had contacted our AirBNB host the day before to see if we could check in a day early and we had been told that we could.  We found our apartment at 724 Azalea Avenue and were relieved that it was very spacious in spite of being a studio apartment.  We met our host, Pam Robinson, who showed us around.  After a quick trip to the grocery, we ate in and called it a night, exhausted from our cross country trip.

Friday, July 15, 2016 –  We were both exhausted after our long drive so we had a very lazy first day in Bainbridge.  Greg finished up some business in the morning & we found the UPS store where he could print his invoices.  He needs to keep billing his customers even if we are on vacation.  I explored the nearby Safeway and decided we would be doing most of our grocery shopping there rather than the pricier Town & Country on Winslow Way.  We walked around Winslow for a while in the afternoon going in some of the many interesting and then had an early dinner at Doc’s Marina Grill.

Saturday, July 16 2016 –  We went to Winslow Farmer’s Market in late morning.  This is the third farmer’s market in eight days!  This one was mostly vegetables and flowers with a few artisan booths.  We bought some heirloom tomatoes and a grilled chicken.  Patty and John got home from Alaska this morning and called to invite us to dinner.  Patty said to come at 4:00 so that we could sit on their porch and watch the cruise ships pull out from Seattle.  It was great to see them and we enjoyed meeting their friends, John & Bonnie.  As usual, Patty had prepared a feast with shrimp casserole, roasted salmon, rice, and green salad with homemade polenta croutons.  It was a perfect night to sit outside enjoying the scenery, the weather, and the company!

Sunday, July 17, 2016 – It doesn’t seem like Sunday!  All the days are running together since we have no set schedule.

This is a text widget. The Text Widget allows you to add text or HTML to your sidebar. You can use a text widget to display text, links, images, HTML, or a combination of these. Edit them in the Widget section of the Customizer.
Loading Comments...